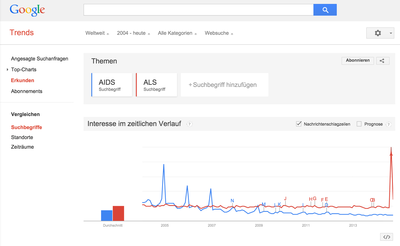 Over the past few years, HIV and AIDS have increasingly disappeared from the media and the awareness of people. How much is illustrated by this Google chart, in which the development of search queries for 'AIDS' and 'ALS' are compared.

ALS (amyotrophic lateral sclerosis) is a degenerative disease of the nervous system. For comparison: around 35 million people around the world live with HIV; the number of people with ALS is estimated to be around 350,000.

The lack of knowledge of the illness in Germany is alarming and the education of children and young people about the consequences of HIV and AIDS is insufficient.

After all, when infected with HIV, medication can now significantly lengthen the life expectancy of those affected, but the illness is still ultimately deadly. Due to the great inconstancy of HIV, a cure and immunisation for the illness is inconceivable.

In order to inform children and young people about HIV and AIDS we hold educational events at schools as part of our prevention project in the form of age-appropriate presentations. A play, called 'I will survive', on the theme of HIV and AIDS adds to the offering. 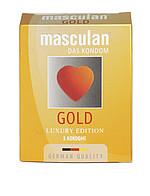 We would like to regain some of the general focus on the topic of HIV and AIDS and to encourage everyone to look into the illness. We do this with the help of advertisements and TV adverts.